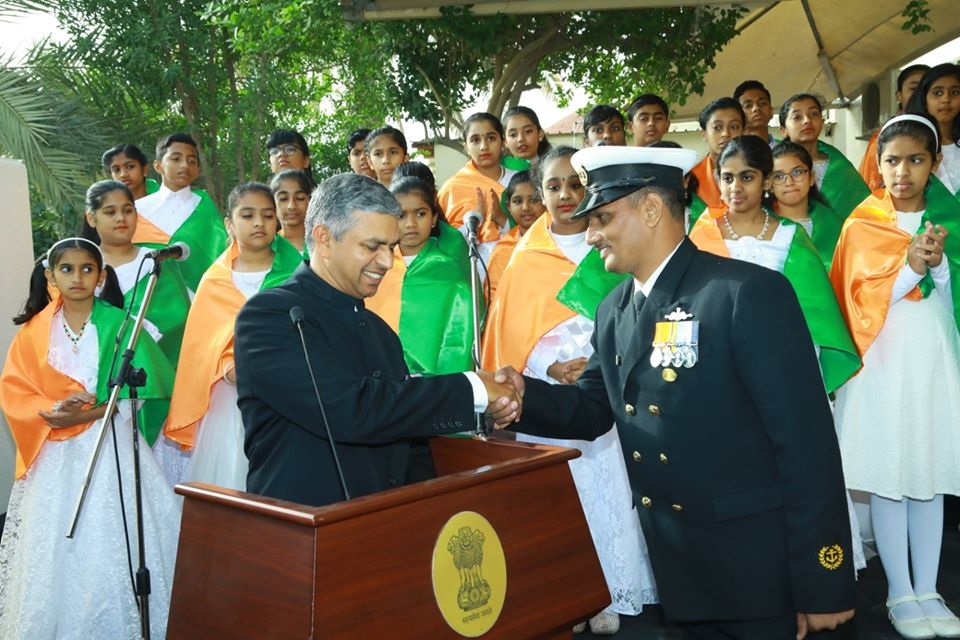 DOHA: Hundreds of Indian residents gathered at their embassy premises to witness Ambassador HE P. Kumaran hoist the tri-colour in celebration of the 71st Republic Day of India, on Sunday 26th at 8 am.

The celebrations started with the hoisting of the Indian flag by HE P. Kumaran followed by the singing of the National Anthem by the choir and the assembled audience.

The Ambassador then read out excerpts from the speech by the President of India, Ram Nath Kovind who had addressed the nation on the eve of 71st Republic Day stating: “Our constitution has given some rights to all of us as citizens of an independent democracy. But within the Constitution itself, we have also taken the responsibility that we should always be committed to the fundamental democratic ideals of justice, liberty and equality and brotherhood.”

HE P. Kumaran stated that the visit of ICGS Samudra Paheredar during the celebrations of India’s 71st Republic Day will further strengthen the time-tested friendship between India and Qatar, and enhance maritime co-operation between the two countries.

Also, present on the occasion was Subordinate Officer (SO) S K Singh, who on 12 August, in the face of unknown danger saved precious lives in a successful operation whilst dealing with fire and salvage of OSV Coastal Jaguar thus averting incomprehensible maritime distress, off the coast of Visakhapatnam.

SO S K Singh was felicitated by the ambassador for his courageous and valiant act of bravery.

The programme ended with school children singing various patriotic songs that had the audience joining in and cheering the youngsters.

In a special message to readers of QatarIndians.com, the Indian Ambassador HE P. Kumaran said, “I sincerely wish you all a very happy 71st Republic Day and am proud of the immense contribution our community has made and are making to this nation of Qatar. I also thank the Qatari government for their continued support and appreciation of the Indians living and working in Qatar.”