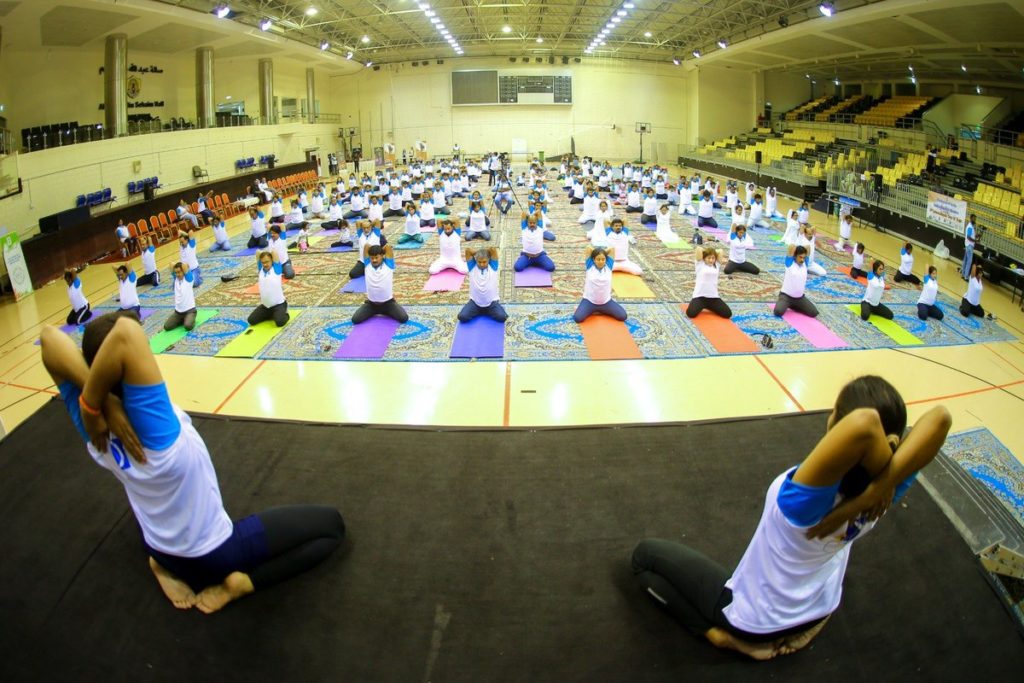 Indians in Qatar united in one accord to celebrate the 5th International Day of Yoga on June 21.

Assembling in large numbers in front of the iconic National Museum of Qatar (NMoQ) members of the Indian community joyfully embraced the spirit of Yoga in the early hours of the memorable day.

Indian Ambassador P. Kumaran was the chief guest and his presence encouraged people to participate in the fitness regime.

The impressive demonstration of Indian expats practicing yoga was organized by the Embassy of India in Doha jointly with Qatar Museums and other Indian community organizations registered under the patronage of the Indian Cultural Centre.

The demonstration was an excellent opportunity for supporters of yoga to showcase the importance of this exercise to others by underlining the benefits to mental, physical and spiritual well-being.

Yoga originated in India ages ago and is a traditional and ancient physical, mental and spiritual practice that focuses on the connection between the mind and the body.

There are multiple physical and mental benefits of yoga such as increased energy, improved metabolism, enhanced cardio and circulatory health, stress relief, calmness, and mental clarity, among others.

Led by the Indian Prime Minister Narendra Modi, Indian missions across the globe celebrated the International Day of Yoga with an unprecedented gettogether of like-minded yoga enthusiasts.

According to Manjri Saxena in the Gulf Times, “ We recently celebrated the fifth International Yoga Day in Qatar. It was a very well organised event that had good help from the volunteers. Thousands of people from different communities, including all age groups, gathered to mark the event.

Yoga has many benefits that go beyond maintaining physical well-being. It also has mental health benefits and can also help people in maintaining a balanced metabolism, apart from reducing stress and improved energy and vitality.

The main yoga event was conducted by a reputed instructor and all the people followed the instructions. It was quite a vision to see a mass yoga event taking place in Qatar”.

According to The Peninsula, the celebration was a part of the global commemoration of the International Day of Yoga and was held at National Museum of Qatar from 5 – 6 in the morning and at Qatar Sports Club Multi-Purpose Indoor Hall from 7 – 8 pm in the following evening.

Yoga classes for Indian community-based in Al Khor were also organised by the community.

The various events in Qatar included Yoga demonstrations by experts and provided an opportunity for all to participate in sessions based on Common Yoga Protocol and comprised of various postures and breathing techniques, followed by meditation.

As a prelude to the celebration of the 5th International Day of Yoga, numerous workshops and also demonstrations in collaboration with well-known Doha based Yoga Studios were conducted by the Indian Embassy in last two months including workshops for students in various schools based in Doha.