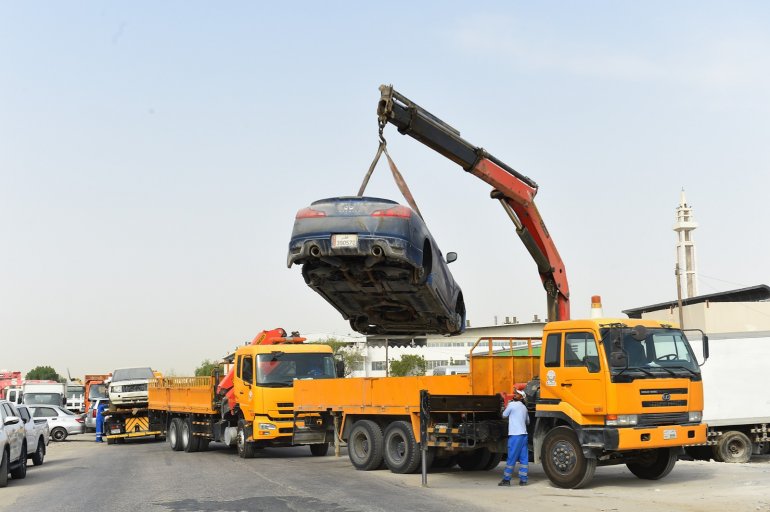 A joint campaign to remove abandoned vehicles in the Industrial Area was launched last week by the Committee for Removal of Abandoned Vehicles in co-operation with the Department of Mechanical Equipment, the Municipality of Doha and the security authorities.

This is part of the Ministry of Municipality and Environment’s continuous efforts to end the nuisance which is distorting the general landscape of the country and also has a negative impact on the environment.

The campaign comes in accordance with the provision of Law No. (18) of 2017 on hygiene.

Saleh Hassan Al-Kuwari said, “The campaign will continue until the completion of the removal of all neglected vehicles in all areas of the Industrial Area.”

According to his expectations around 7,000 to 10,000 neglected cars will be removed during the campaign. “This means that the campaign will continue for about one to three months due to the large size of the industrial zone and the number of vehicles in that area,” he added.

The campaign targets abandoned cars located within the borders of the Industrial Area with the participation of a number of equipment and machinery belonging to the Municipality, the Lekhwiya and the General Directorate of Traffic.

Al Kuwari pointed out that the abandoned cars are lifted and then transferred to the tow yard in Al Mashaf area which so far has accommodated up to 25,000 cars. Some 3,000 rickety cars were chopped off in two months, according to the official.

On his part, Marzouq Mubarak Al Mesifir remarked, “The committee’s efforts started from the municipalities of Doha, Al Shahaniya and Al-Dhaen and now has now been extended to the Industrial Area which is considered the most important. The committee has intensified its efforts during the last period through continuous campaigns in these areas.”

After transferring the cars to the tow yard in Al-Mashaf, Messemeir and Umm Salal areas, six months will be granted to their owners, as per legal procedures, after which the vehicles will be disposed of by an auction, organized by the ministry. Alternatively, at the request of local companies, they can get rid of the cars by cutting them up and thus benefiting from the scrap iron.

“Since the beginning of this year, 4,950 abandoned cars have been lifted, and the campaign will continue until the removal of abandoned vehicles from all the municipalities,” he added.

Lieutenant Ali Rashid Al Marri of the General Directorate of Traffic and Patrols explained that the traffic participation comes within the framework of co-operation with the concerned authorities, where patrols are organizing traffic during the removal process.

Ghanem Nasser Al Qubaisi said, “The campaign aims at removing the neglected cars from street numbers 16 to 52. Today, about 50 -75 neglected cars were detected and removed during the morning and evening shifts.”

The neglected vehicles are also hindering the implementation of important development projects in the Industrial Area due to unnecessary congestion.

Find here the procedure to apply for the family resident visa if you are staying in company-provided accommodation.