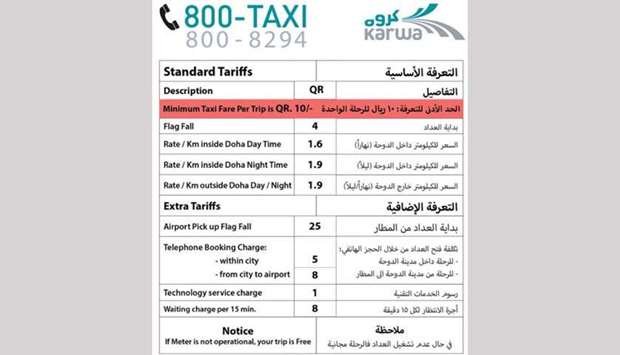 Public transportation provider Mowasalat has introduced new tariffs, including a technology service charge of QR 1 that raises the minimum fare to QR11.

On its Twitter account, the company announced: “New taxi tariff shall be applied and effective from February1, 2018.”

Based on Mowasalat’s new tariff matrix, the “minimum taxi fare per trip” is QR10. However, passengers have to add QR1 for the new “technology service charge”, which takes the minimum to QR11.

Mowasalat did not increase the fare for the “airport pick up flag fall” and “waiting charge per 15 minutes,” which remains at QR25 and QR8, respectively. However, the rate for the telephone booking charge was increased from the standard QR4 to QR5 (within city) and QR8 (from city to airport).

“Instead of the usual QR48 from the airport to my residence, on Friday I had to pay QR54 on account of the tariff hike,” said a Doha resident, who had just returned from a foreign trip. Similarly, another resident, who just returned to Doha on Thursday, complained that he paid QR15 more for a ride from the airport to his house in Hilal. “It only used to be around QR40,” he said.