MUGHAL-E-AZAM – An epic extravaganza not be missed! 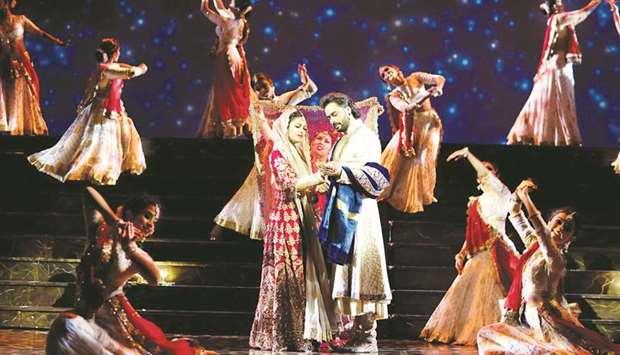 MUGHAL-E-AZAM – An epic extravaganza not be missed!

The nearly 150-minute epic extravaganza started with the narrator’s impeccably perfect diction explaining the legendary love story between Salim – an emperor’s son and a Anarkali – a beautiful court dancer and the father Emperor Akbar’s staunch opposition to the lovers.

Recreating screen spectacle on stage is never an easy task and giving it a live three-dimensional version is certainly commendable.

A special word of praise for some brilliant choreography by MayuriUpadhyayandmesmerising dance sequences by a dedicated team of talented Kathak dancers who excelled marvelously, especially in the ‘MohePanghat’ and ‘Jab Rat haiaisiMatwalli’ sequences.

The crowning glory was the timeless “Jab pyarkiyatudharnakya” which had the audience clapping and singing along.

A surprise element was the ‘live singing’ to a pre-recorded track using clipped mics by the amazing protagonists and singers combined. Their melodious voices in rhythm with golden unforgettable oldies brought a touch of nostalgia to the show.

The special sound and light effects of the ‘war scene’ magically translated the epic landscape of the celluloid movie to the stage. The movement of scenes and shifts of scenery was smooth as silk.

The extravagant sets of the Mughal era featured a cast and crew of more than 350 people and over 200 lights illuminated the stage by award-winning technicians making the play look both ethereal and magical.

The acting was flawless underlined with an impeccable Urdu diction by the Narrator with the play’s dialogues written by the late Kamal Amrohi and WajahatMirza.

Kudos to Nissar Khan who as Emperor Akbar with his rich baritone voice perfectly portrayed the nuances of an embattled monarch caught between national justice and his love-stuck son.

Dhanveer Singh as Salim though a bit subdued in the first half rose to great heights in the second, especially in emotion laded individualistic scenes with his parents and lady love.

Neha Sargam playing Anarkali was not only pretty but also effortless in her performance, graceful in dance and melodious in her singing.

SonalJha as Jodha essayed the role of a mother torn between husband and son with the skilled disposition of a veteran actress.

The entire team breathed life into a historical and cultural legend and made it relevant to current generations.

Wall-mounted tele-monitors on either side of the stage translated dialogues simultaneously in English and Arabic for benefit of non-Hindi/Urdu speaking viewers.

Director Khan lauded the Doha audience for the thunderous applause his magnum opus received, something he had not experienced in the previous 180 worldwide performances.

He also thanked Indian Ambassador P. Kumaran, QNCC and Qatar Tourism Authority for their support culminating into Mughal-e-Azam becoming the highlight of the Qatar-India Year of Culture.

Khan invited on stage Q-Tickets CEO and Founder DrTejinder Singh and AartiMahajan, Co-Founder and COO whose unwavering support made Mughal-e-Azam – The Musical a reality for Qatar theatre lovers.

For those who could not attend last night’s electrifying performance, today’s last show is an event not be missed!

*The writer is an accomplished artiste having acted in several award-winning plays, TV serials and Oscar-nominated short films.

FASTags will become mandatory for all vehicles in India, private and commercial, from December 1, 2019