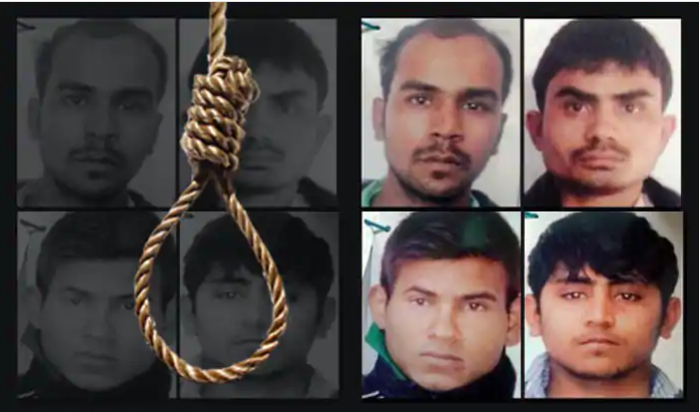 7 Years Later, All four convicts of Nirbhaya case – Mukesh Singh (32), Pawan Gupta (25), Vinay Sharma (26) and Akshay Kumar Singh (31) were hanged in Tihar Jail today in the early hours. The four convicts were hanged for the savage assault to a paramedical student who came to be known to all of us as Nirbhaya.

Nirbhaya’s mother Asha Devi said minutes after four of her daughter’s rapists and killers were hanged, “We will continue our fight for justice for India’s daughters. Our wait for justice was painful and agonising. We finally got justice,”

“I hugged my daughter’s photo,” Asha Devi said. “The beasts have been hanged.”

“I want to thank everyone, judiciary, government for this. The courts proactively dismissed all petitions. The country was ashamed in 2012,” Asha Devi said.

It is a crime that shocked India and after 7 years convicts of the Nirbhaya case have been hanged finally. A three-judge Supreme Court bench rejected the final plea by the convicts in a late-night hearing of the Nirbhaya case. Justice has prevailed. The pre-dawn execution took place less than two hours after the Supreme Court dismissed the final petition of the convicts.

Stating that “Justice has prevailed”, Prime Minister Narendra Modi on Friday called for a united effort to build a nation where the focus is on women’s empowerment while ensuring dignity and safety for them.

It is of utmost importance to ensure dignity and safety of women.

Our Nari Shakti has excelled in every field. Together, we have to build a nation where the focus is on women empowerment, where there is emphasis on equality and opportunity.