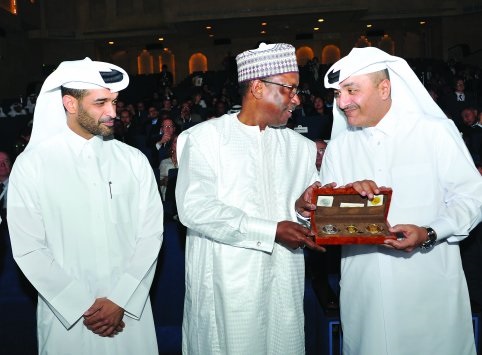 The Ministry of Administrative Development, Labour and Social Affairs (ADLSA) celebrated the 100th anniversary of the founding of the International Labour Organization (ILO) at Katara Cultural Village on Wednesday, 16th October 2019.

H.E. the Minister of Administrative Development, Labour and Social Affairs Yousuf Mohamed Al Othman Fakhroo spoke on the centenary occasion underlining the fact that Qatar was keen to launch a package of policies and legislative amendments to achieve decent work to help establish and strengthen balanced working relations with its reference to work contracts.

H.E. the Minister also announced the Cabinet’s adoption of new legislation related to the approval of the draft minimum wage law, to establish controls to facilitate the transfer of workers to another employer during the contract period and to preserve the rights of both parties. It also included a draft law to abolish exit permits and apply to parties not subject to the provisions of the Qatari Labor Law as well as domestic workers. Such legislation will be enforced immediately after the end of its legislative session.

His Excellency expressed Qatar’s appreciation for the technical support provided by the ILO to achieve the outputs of the Technical Cooperation Program.

The Minister stated that ADLSA was keen on continuing the constructive co-operation with the ILO Office in Doha to implement mutually agreed action plans and stressed that the participation of Qatar in the centenary celebrations of the International Labour Organization was an acknowledgment of the organisation’s considerable efforts in the field of work over 100 years, which was proof of the close partnership between the ILO and the State of Qatar.

ADLSA had during the past few years build a suitable work environment based on work contracts for the welfare of workers and the Ministry had made a number of new laws and upgraded existing ones.

The Minister said that Qatar through the Central Bank had released commemorative coins on the occasion the centenary celebrations thus recognizing the role of ILO in establishing social justice and a great cooperation between Qatar and the International Labour Organization in the labour sector.

The event was organised by ADLSA in cooperation with ILO and other stockholders under the theme ‘The Future of Work in Qatar’.

Addressing the event, Deputy Director-General for Field Operations and Partnerships, Moussa Oumarou, congratulated the Minister for the landmark reforms announced in front of the august assembly.

“I thank you on behalf of the ILO for taking this bold and transformative step, a first in this region. ILO stands ready to support Qatar with the modalities of their enforcement,” he added.

Oumarou also stated that a team of dedicated ILO professionals are working closely with ADLSA colleagues here in Qatar, supporting the ambitious labour reforms that nation has embarked on and they facilitate dialogue on day-to-day basis between the government, employers, and workers to ensure that the reforms that are being considered have everyone’s support and buy-in.

“Two weeks ago, for example, the ILO was parts of a dialogue between MADLSA, the Qatar Chamber of Commerce and Industry, in cooperation with the International Organization of Employers, on the role of business in migration governance and labour reforms,” he added.

Qatar joined the Organization in 1972 and an ILO office was established in Doha in 2018 to support the Government’s business process development program.

3 proposals to be implemented soon in a landmark move to support expats living in Qatar: Permission for sons of expatriates to work without changing their sponsorship, temporary work visas for up to 6 months and 20 % reduction in the fees for online transactions of all services provided by MoI.