The Al Mayassa Theater at Qatar National Convention Centre was filled with peals of laughter on Thursday night (13th June), as popular comedian Zakir Khan regaled the packed hall with his inimitable sense of humour.

Interconnecting the clashes and crushes of his rustic bringing up with the sophistication of his socialite girlfriend, Zakir drew out humour from both comic and tragic instances that played out during their ultimately failed relationship.

Revealing hilarious ‘inner secrets’ of the universally accepted only-boys-out-get-togethers and comparing it with how and what girls discuss during their meets, Zakir had the audience in splits as they easily related with real-life situations that reflected their own lives.

Taking the glued listeners on a rib-tickling ticketless train journey from his village bound home-town to the capital of India was an exhilarating experience interspersed with various comic tracks and funny anecdotes.

Zakir who started out as a writer scripting radio shows and poem in chaste Hindi/Urdu lingo proved the reason for the rise of his popularity by winning Comedy Central’s India’s third best stand-up comedian competition in 2012.

Zakir quipped Hindi idioms and couplets that have gained him the popular title of “Sakht launda”, (a guy with immense self-control) borrowed from his now famous punch line of the same name.

By the end of the show, as Zakir acknowledge the standing ovation,  one realized why he has over  three million subscribers on YouTube and is rated as one of India’s biggest stand-up comic in recent times.,

In contrast, the opening surprise act by Nishant Suri, an upcoming young comedian whose claim to fame is winning the prestigious Comicstaan, a popular comedy competition brought in a breath of fresh and infectious comedy.

Nishant who spoke mostly in Hinglish (a mix of English and Hindi) narrated many personal experiences and the instances of constantly being compared to his studious engineering graduated elder brother touched a relatable chord of sibling rivalry among many in the audience.

The programme named ‘Desi Comedy Nights’ was organised by Millennium Entertainment who have previously brought other famous Indian comedians to Qatar and one hopes will continue to entertain and enthrall South Asian expats here with many more such engaging shows.

In which City Stand up Comedian Zakir Khan born and raised??

Name a tourist attraction or a place in Qatar that one should never miss visiting?

Why Visiting a Waterpark Is a Must-Do activity in Summer!

Now that Summer has officially kicked off and the temperature soaring. A trip to a waterpark should be a mandatory summer event in Qatar for every family. Even if you have a pool in your compound, the fun of a waterpark simply can’t be matched anywhere else.

It doesn’t matter who you are or what you do. Everyone can benefit from a day at a water park. If you’re looking for an Aqua Adventure or just an awesome day out, then look no further than Aqua Park Qatar. Check out Aqua Park’s limited time offers during Ramadan. Book your tickets online and beat the summer!

Ramadan is the time of togetherness. Aqua Park in Qatar is one of the coolest places to hang out during the summer in Qatar and it’s only a short drive away from Doha.  Enjoy with your family at Aqua Park Qatar which features a wave pool, lazy river, surfing machine & a range of waterslides. 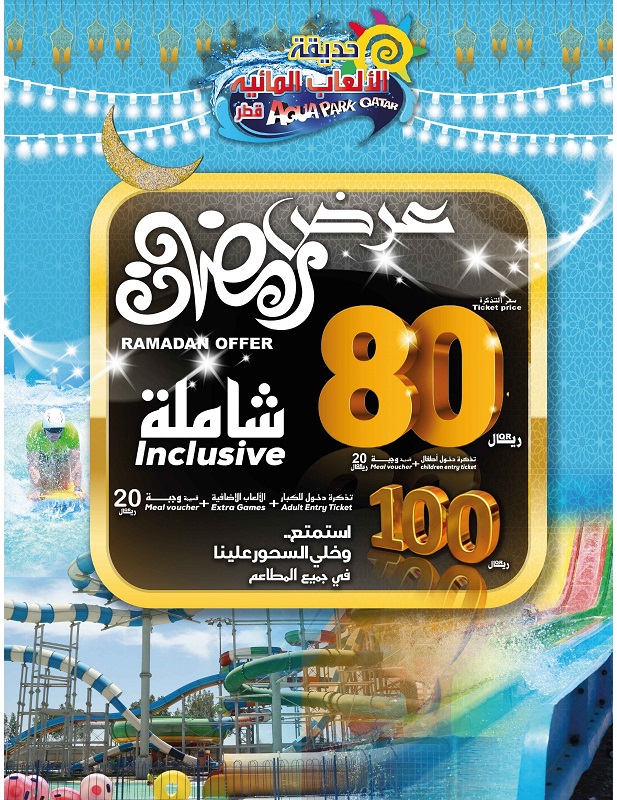