In a statement announced by Government Communications Office (GCO) on 26th November 2020, it has been announced that in continuation of the procedures for gradually lifting the coronavirus restrictions imposed in the State of Qatar and based on health indicators in Qatar and internationally, and on previously announced Qatar’s travel policy, following are the changes made to the exceptional entry permit

For Residents currently in Qatar:

For Residents currently outside of Qatar:

The decision is based on national and international epidemiology statistics.

These decisions will come into effect from 29th (Sunday) of November 2020. To know more visit the Ministry of Public Health’s website.

The Ministry of Public Health has clarified that passengers coming from low-risk countries will have to undergo a swab test on the sixth day after arriving in Doha. It said that Ehteraz status will be yellow till they complete their seven-day quarantine and get a negative result in the swab test.

“They (Passengers from low-risk countries) must perform a swab test on day six and their Ehteraz status will not turn green until day seven after the swab test has been performed and a negative result has been verified,” the Ministry said on its social media pages. “Please note that returning passengers cannot have the swab test earlier than day six,” the Ministry added.

The Ministry added that this process helps to reduce the risk of returning travellers bringing the virus back into Qatar and passing it on to other members of the community. In the latest list of low risk countries, the Ministry has included 41 countries.

As per the travel policy announced by the Government Communications Office, arrivals to Qatar from low-risk countries are required to take a COVID-19 test upon arrival at the airport, and to sign a formal pledge to adhere to quarantine at home for a week, noting that the traveller’s status on the Ehteraz application will be yellow, which means that they are required to quarantine.

If there are accredited COVID-19 testing centres in one of these low-risk countries, obtaining a COVID-19 free certificate from one of these centres exempts the traveller from taking the test at the airport on arrival in the country, provided that the date of obtaining the certificate does not exceed 48 hours before travelling.

These passengers are also required to undergo a seven day home quarantine upon arrival. If the result of a test done on the sixth day is positive, the traveller will be transferred to isolation, and if it is negative, the quarantine period ends at the end of that week and the traveller’s status on the Ehteraz application will change to green. 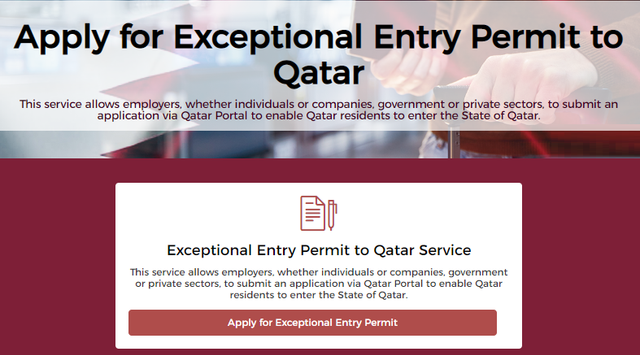 Due to COVID-19 restrictions and temporary ban on international flights many Qatar Residents who are currently struck outside Qatar couldn’t return back to Qatar. Exceptional Entry Permit is a temporary service which helps residents of Qatar who wish to return back can apply to enter Qatar.

Since yesterday (1st of Aug 2020) application has gone live on https://portal.www.gov.qa/wps/portal/qsports/home It is a welcoming news for many residents who are waiting to return to Qatar to meet their family and / or to get back their work.

Wearing face masks outside home made compulsory in Qatar | Violators will be fined up to QR 200,000

Wearing face masks outside home made compulsory in Qatar | Violators will be fined up to QR 200,000

Except in case when a person is driving alone, residents and citizens should wear masks while leaving the house / when they are out from home for any reason. This was announced during a regular cabinet meeting chaired by H.E. the Prime Minister and Minister of Interior Sheikh Khalid bin Khalifa bin Abdulaziz Al -Thani held via video conferencing recently.

H.E. Minister of Justice and Acting Minister of State for Cabinet Affairs Dr. Issa bin Saad Al-Jafali Al-Nuaimi stated the below after the meeting,

1. Compulsory to wear masks while residents and citizens leave house

To compel all citizens and residents upon leaving house for any reason to wear masks, except in the case when a person is alone while driving a vehicle, and the Ministry of Interior takes the necessary measures in this regard.

1- To compel all citizens and residents upon leaving house for any reason to wear masks, except in the case when a person is alone while driving a vehicle, and the Ministry of Interior takes the necessary measures in this regard. #QNA

2- In case of non-compliance with this decision, penalties stipulated in Decree Law No. 17 of 1990 regarding the prevention of infectious diseases applies to violator by imprisonment for not exceeding 3 years and fine not exceeding QR 200,000, or one of these two penalties. #QNA

This decision is effective from Sunday, 17/5/2020, until further notice.

During the cabinet meeting, the cabinet has also approved some other draft decrees which includes,

Fake News: Video circulated on social media of a shopper who fell unconscious in supermarket is not because of Coronavirus (COVID-19) – MoPH Confirms

Fake News: Video circulated on social media of a shopper who fell unconscious in supermarket is not because of Coronavirus (COVID-19) – MoPH Confirms

The Ministry of Public Health (MoPH) confirmed that the video being circulated over Social Media of a shopper who fell unconscious in a supermarket because of COVID-19 is a fake news. MoPH confirms that it is wrong and also stated that the he lost his balance due to fatigue and he is in good health.

The Ministry of Public Health has also insisted public to verify accuracy and authenticity of any information passed over social media.

Face masks compulsory for all Shoppers, Service and Contracting Sector Workers in Qatar

Face masks compulsory for all Shoppers, Service and Contracting Sector Workers in Qatar | Up to Three-year jail term and a fine not exceeding QR 200,000 for non-compliance

As a part of measures to fight against coronavirus (COVID-19) cabinet has decided to make wearing face masks compulsory for all Shoppers, Service and Contracting Sector Workers in Qatar. This decision is effective from 26th April 2020 (Sunday) until further notice. The Cabinet decision as follows,

MOCI announced the maximum prices for selling Vegetables, Fruits and Seafood (Until April 25, 2020)

The Ministry of Commerce and Industry has fixed the maximum prices for selling Vegetables, Fruits and Seafood until 25th April 2020.

Also announced, each violator will be subject to the penalties stipulated in applicable laws, decisions and regulations. Source: MOCI Qatar | Cover image used is just for representation and not the actual.

The Ministry of Public Health does not advise healthy people to routinely wear a mask to reduce their risk of COVID-19. However, it is advised to wear a mask under certain conditions.

If you are sick, with respiratory symptoms like coughing or sneezing wear a mask:

If you are not sick, with respiratory symptoms like coughing or sneezing, wear a mask (ONLY IF)

– People diagnosed with a chronic disease (such as diabetes, chronic renal disease, chronic heart disease, Chronic lung disease, cancer, immune compromising condition) or if you are taking medications that lower your immunity

How to safely use a mask? 1- ADVICE ON THE USE OF MASKS
2- HOW TO SAFELY USE A MASK ?#YourSafetyIsMySafety
#StayAtHome pic.twitter.com/rjbDZIukr7

The Ministry of Commerce and Industry has announced the mechanism for the second phase of distributing masks through pharmacies. The second phase will start on Monday, 13 April 2020.

List of pharmacies where residents / citizens can avail these masks

The Ministry announces the mechanism of the second phase for distributing masks through pharmacies, Starting Monday, April 13, 2020 #Qatar #YourSafetyIsMySafety pic.twitter.com/KXWgVKOiou

Conditions which pharmacies should follow while selling masks to residents / citizens

Source: MOCI Qatar | Cover image used is just for representation and not the actual.

His Highness the Emir Sheikh Tamim bin Hamad al-Thani has appreciated the spirit of solidarity, harmony and defiance that prevailed among the people of Qatar, both citizens and residents, since the beginning of the blockade imposed by fellow GCC countries.

“This spirit has frustrated the hopes of those who banked on the opposite side because of their ignorance of the nature of our society and our people,” the Emir said in an address to citizens and “all those who live on the good land of Qatar” on the current situation and the future directions of Qatar.

The Emir said day-to-day life in Qatar has continued as normal since the onset of the blockade. “The Qatari people instinctively and naturally stood up to defend the sovereignty and independence of their homeland,” he said adding that “all those who live in this country have become spokespersons for Qatar“.

He recognised, with great pride, the high moral standard exercised by the people of the country despite the campaign of incitement as well as the siege. “They combined the solidity of stance and magnanimity of behaviour that has always characterised the Qatari people. They have amazed the world by maintaining a high level of tenacity in tackling the situation, despite the unprecedented incitement in tone and language, the honour-related prejudices, and the unparalleled blockade in the relations between our countries.”

The Emir said this was tantamount to a true moral test “where our society has achieved great success, as we have proved that there are basic principles and norms that we observe even in times of conflict and dispute, because we respect ourselves first and foremost“. He called upon all to continue this approach, and not slip into “what is inappropriate for us, nor for our principles and our values“.

He said the sons and daughters of the country have realised, with common sense and political awareness, the seriousness of the campaign against their homeland, and the goals of the siege imposed on it.

“They have seen through the heavy curtain of fabrications and incitement, without blurring or distorting their vision, and were able to understand the implications of the attempt to impose pressure on this country, and the gravity of the subservience to language of incitement, threats and diktats.

“It has become evident to those near and far that this campaign and the steps that followed it had been planned well in advance, and that its plotters and implementers carried out an attack on the sovereignty of the State of Qatar by planting statements that had not been spoken, in order to mislead public opinion and the world and achieve predetermined goals.”